A salad that’s filling enough to be enjoyed as a main dish. The salty-tangy-sweet dressing is fortified with the flavors and aromas of traditional Thai ingredients that include galangal, kaffir lime and its leaves, lemongrass, cilantro, chilies and palm sugar.

The first time I made Thai glass noodle salad, I thought it was pretty good. There was heat from the chilies, sweetness from the sugar, tang from the lime juice and saltiness from the fish sauce. I made it based on a recipe from a cookbook written by an American. Little did I realize how watered down the flavors were to appeal to the white man’s palate.

It took a trip to Chiang Mai to realize how bland — how utterly lacking — my old glass noodle salad was. It’s not that I didn’t get the balance of flavors wrong the first time. The problem was the lack of depth.

In Thailand, glass noodle salad is a really hot dish. And I don’t mean it’s served at a high temperature. No, it’s served at room temperature as most salads are. By “hot”, I mean spicy hot. I could manage only a few mouthfuls but that was enough to get a whiff of what seemed to be so many spices and herbs in the dressing.

In time, I learned to make better glass noodle salad. Good enough to decide to update the old recipe.

Recipe by Connie Veneracion
Cilantro figures prominently in this recipe. The roots go into the spice base of the dressing; the stems and leaves are used as salad greens.Make sure you use Thai basil and not sweet basil.Sausage meat, browned in its own fat, is used here in lieu of the usual plain ground pork. The shrimps are added to the meat to allow them to soak up the flavors of the rendered fat.
Prep Time 20 mins
Cook Time 10 mins
Total Time 30 mins
Course Main Course
Cuisine Thai
Servings 4 people Cook the sausage meat and shrimps

If you can get Thai sausages, the better. Otherwise, use the best spicy and garlicky sausage meat that you can find. Updated from a recipe published in May 21, 2019
Keyword Noodles, Salad, Spicy 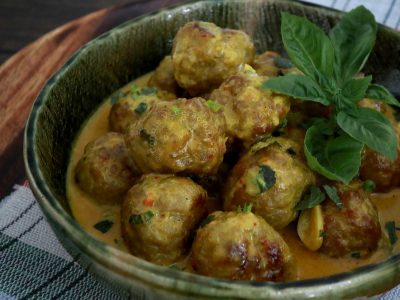 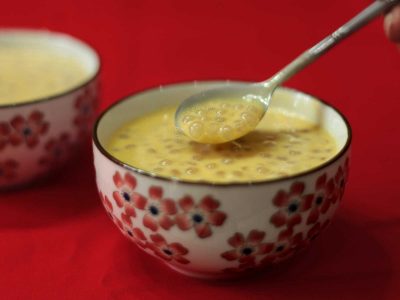 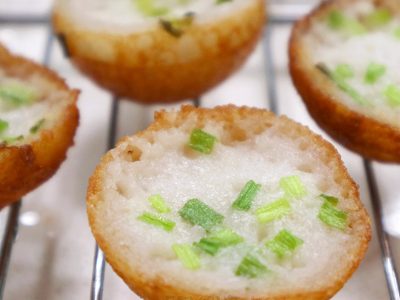