Warorot Market in Chiang Mai is closed at night but the streets surrounding it were buzzing with fruits, flowers and food when we were there in January this year. It was from one of the food stalls there that we had our first experience of Thai coconut custard pancakes or khanom khrok (yes, it turns out that the correct spelling includes “h”) as they are called by the locals.

These tiny pancakes consist of three parts — the shell which is crisp and lightly chewy at the same time, the custard filling, and the topping which can be sweet corn, scallions or tiny cubes of cooked taro. In Chiang Mai, we tried the ones with corn and scallion toppings, they were lovely but, for me, it was the ones with scallion that made me gasp in appreciation — with total abandon, I must say.

Just how small are these pancakes? In diameter, a bit larger than takoyaki. There is a special pan in which they are cooked — cast iron and similar in appearance to takoyaki pan but the indentations are wider and shallower. Similar to the Vietnamese banh khot pan too.

We were not able to buy the proper pan for making Thai coconut custard pancakes at home so we had to make do with our takoyaki pan. As a result, our pancakes were smaller but thicker at the center. The size wasn’t really an issue anyway. What’s important is that we got the taste and texture right. Well, Alex did. She was the one who made them.

The shell is a combination of rice flour, palm sugar, grated fresh mature coconut, coconut milk, salt and cooked jasmine rice for better aroma. The ingredients were processed in the blender just until no large pieces remained.

The filling is made by mixing together coconut milk. rice flour, sugar and salt.

It was a first attempt at making khanom khrok at home and it was a resounding success. Perfect shells that crackle, and custard so soft that it just spreads inside the mouth. If I an obviously focused on taking photos of the scallion-topped pancakes, it’s because I prefer them over the ones with sweet corn. Speedy liked the ones with sweet corn better. 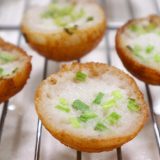 For the custard filling

We have a non-stick tayokaki pan. While we almost always brush the indentations with oil or butter before cooking anything in it, in the case of these pancakes, it wasn’t necessary to use oil. Fresh coconut cream was used and its natural oil content was sufficient to make sure that the pancakes did not stick to the pan. I have no idea if using canned coconut cream or coconut powder will yield the same result. I suggest you make two or three pancakes first and observe if oil is rendered during cooking. If not, brush the indentations of the pan with oil. Based on a recipe from Hot Thai Kitchen.