You are here: Home / Travel Tales / Taipei 101 Evokes Everything That is Asian in Me

Taipei 101 Evokes Everything That is Asian in Me 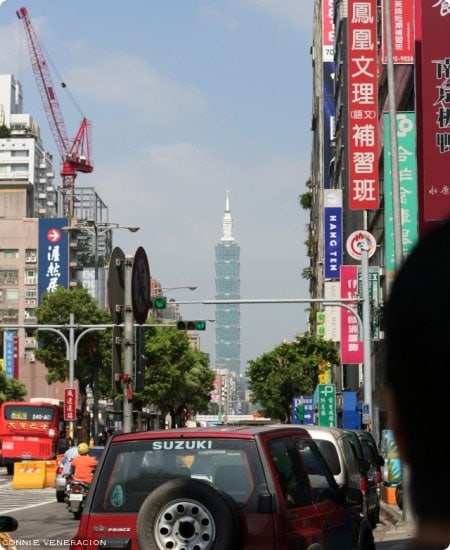 It might sound crazy to find romance in architecture but romantic is the only word I have for Taipei 101. It mesmerized me twelve years ago. From the Taoyuan International Airport all the way to central Taipei, I was taking photos of the building. Everywhere we went, if Taipei 101 was visible, I was clicking away.

Seeing it again twelve years later has not changed how I feel. While some structures are engineering marvels (like Eiffel Tower) and some buildings are just tall (Burj Khalifa), Taipei 101 is a fusion of old and new. It integrates elements of traditional symbolism with the bravado of embracing change to stay relevant in the present and the future.

Unlike twelve years ago, I have stopped gaping at Taipei 101 from the outside (the photo above is from the 2007 trip) to begin grasping its essence from within.

Taipei 101 is replete with symbolism

I love how Taipei 101 visually represents elements of Asian culture. The flared top of the modules, each comprising eight floors, makes one think of Asian pagodas that symbolically connect the earth and sky. The way the modules are stacked make them look like a pile of yuanbao — gold and silver ingots used as currency in imperial China. And the top and bottom of the modules could be nodes of a huge bamboo stalk.

From a more Western and modern perspective, the building has 101 floors to symbolize lofty ideals that go beyond a perfect 100.

Taipei 101 as an enormous bamboo stalk

In Asia, we often hear it said that to successfully deal with the challenges of life, we must be like the bamboo. Bend but never break. Sway with the wind but do not fight against it. These two characteristics of the bamboo found its way into the structural design of Taipei 101.

Constructed in a city that lies on a major fault line that subjects it to tremors, Taipei is also on the path of fierce typhoon winds. Taipei 101 was built to withstand both.

The structural design of Taipei 101 is jaw dropping.

“Because of its proximity to geological fault lines, and the propensity in the region for typhoons, pioneering engineering work had to be carried out to make the building stable and safe.

“The construction process involved 36 high-performance columns, including 8 ‘mega-columns’ packed with concrete. At 8-storey intervals, outrigger trusses connect the exterior columns to the columns in the building’s core.

“The building’s foundations are reinforced by 380 piles driven 80 m into the ground. These piles have a diameter of 1.5 m and are capable of bearing a load of 1,000-1,320 tonnes.” [Source: Designing Buildings Wiki]

The trusses supporting the atrium

If you need to visualize structural strength, just gaze at the trusses that support the atrium in the mall area.

On the way up to the Observatory ticketing booth, we passed through the atrium and I took photos of the trusses not really knowing their significance. I was simply awed by their appearance.

It was only later when reading about the architecture of Taipei 101 did I realize that the trusses are one of the two publicly visible structural designs of the building.

The second publicly visible structural design of Taipei 101 is the damper. Suspended at the center of the tower from the 92nd all the way to the 87th floor is the largest and heaviest damper sphere in the world. It can be viewed from the 89th floor observatory.

The purpose of a damper? Absorb strong vibrations caused by strong winds and seismic tremors to prevent structural damage and discomfort to the occupants of the building.

When I first saw it twelve years ago, I was at first raring to take photos. Then, I looked down, felt faint and grabbed the handrails. Can’t take photos with my hands clenched on the handrails. When I finally let go, what photos came out were so blurred they were unusable.

Well, twelve years is a long time to muster enough guts to take better photos of the damper.

My knees still went weak with the attempt but I managed.

Why does the photo look cropped? It isn’t, actually. It’s just that the damper is so large that even using wide-angle lens, I still couldn’t get the whole thing inside the frame. If you’re into EXIF data, here are the file into of the photo:

I stood on the same spots were I took photos of the cityscape twelve years ago and noticed how much Taipei has changed and stayed the same at the same time.

The same bridges and mountains.

The same streets but with more and taller buildings.

Taxis all lined up on the same street.

Ah, Taipei. You’re still a lovely city with an amazing skyscraper, and I can’t think of one without the other.