You are here: Home / All Recipes / Stir-fried Korean Fish Cakes

Made with fish paste, flour and vegetables, Korean fish cake is eomuk but fondly called odeng. In this dish, odeng is cooked in sake, seasoned with soy sauce and tossed with vegetables.

Until over a year ago, I knew nothing about Korean fish cakes. My daughter, Sam, and I were at the night market in Hanoi where she ordered a snack of solids swimming in a thick red sauce that screamed chili at the top of its non-existent lungs.

“Fish cakes,” Sam replied. And she told me that fish cakes in hot sauce was a popular snack when she was in college. Cheap, filling and, she assured me, very tasty.

Feeling encouraged but not without trepidation (my tolererance for hot food is not so good), I tried a piece of fish cake that Sam offered. The sauce was really hot but I loved the texture and mouth feel of the fish cake.

More than a year later, stuck at home and worried about food supply, we ordered everything that looked good from a small Korean grocery in the neighborhood. One of the items I chose was a bag of fish cakes.

Korean fish cake is sold in various forms. What we got came in sheets. We keep them in the freezer — you can see ice crystals in the photo above. It’s easy to separate the sheets while frozen and they only need a few minutes to thaw completely.

While thawing the fish cakes, I prepped the vegetables which were really things I found in the fridge — bok choy tips and a tomato. To go with them, an onion and plenty of garlic.

For aroma and depth of flavor — and some crunch too — sesame seeds. Black, brown and white (you can use just one color) which I toasted in an oil-free pan.

The fish cakes having thawed completely, I cut them into irregular triangles.

Instead of using regular cooking oil, I sauteed the garlic in sesame seed oil. Oh, my goodness… the combined aroma was amazing!

The fish cakes were added to the garlic and cooked until the edges started to brown.

Korean fish cakes need liquid to cook in. Water is the most common choice but I decided that my fish cakes were going to cook in sake. When the fish caked looked bloated after the liquid has been absorbed, I drizzled in some soy sauce.

Then, the vegetables were tossed in. A minute later, my stir-fried Korean fish cakes were ready to be enjoyed. 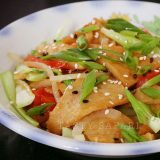 Connie Veneracion
Salty and sweet with a delighful nutty aroma, this stir-fried Korean fish cakes can be enjoyed as a snack, a side dish or even as a main course.
Print Recipe Pin Recipe
Prep Time 5 mins
Cook Time 10 mins
Course Main Course, Side Dish, Snack
Cuisine Korean
Servings 2 people