You are here: Home / All Recipes / Pork Ribs and Vegetable Soup (Nilagang Baboy)

This is nilagang baboy, an updated version of three old recipes. What’s new in this version?

Pork spare ribs instead of the more bone-y (and cheaper) cut used for soups. On the dining table, spare ribs are easier to serve in individual bowls, and they are easier to eat with just a spoon and a fork.

Saba bananas (cooking bananas native to the Philippines) are combined with yellow corn to add a lovely sweetness to the salty broth seasoned with patis (fish sauce).

And then, there’s pechay, a variety of Chinese cabbage with dark green leaves and white stalks. It’s a hybrid of bok choy. Unlike the sweetish white cabbage that we often find in nilaga, pechay has a subtle peppery flavor that adds so much richness to the dish.

Recipe by Connie Veneracion
Like many meat and vegetable soups in the Philippines, nilagang baboy is served as a main course. Serve with a mixture of fish sauce and calamansi juice on the side for drizzling over the meat and vegetables. Best enjoyed with rice.
Prep Time 10 mins
Cook Time 1 hr 30 mins
Total Time 1 hr 40 mins
Course Main Course, Soup
Cuisine Filipino
Servings 4 people 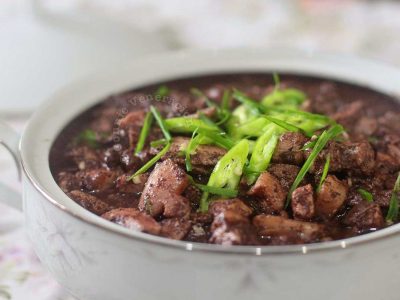 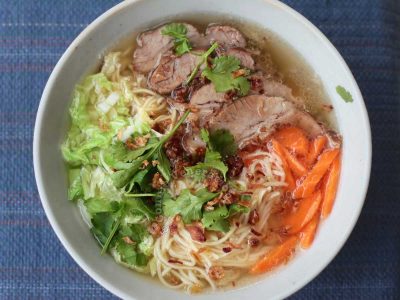