You are here: Home / All Recipes / Kimchi Omurice

Omurice is a Japanese rice-and-egg dish that fuses local cuisine with the Westerner’s love for ketchup. This version adds a Korean touch by cooking kimchi fried rice, wrapping it in an omelette and slathering the dish with ketchup before serving.

Western dishes, including the omelette, were introduced to Japan during the last quarter of the 19th century. It was the Meiji era, Japan had discarded the hereditary class system, and opened its doors to Western technology and the modern capitalist system. That explains the extent of Western presence in Japan at the time that omurice was born in 1902 at a Western-style restaurant called Renga-tei in Tokyo’s Ginza district.

The Japanese introduced omurice to Korea and Taiwan, both of which were Japanese colonies until the end of World War II, where it became just as popular.

Except for the presence of the omelette wrap and the ketchup on top, there is no universal formula for making omurice. In fact, there is even no single formula for cooking the omelette. It can be thin like a crepe or it can be fancy like when the egg whites are beaten to stiff peaks to make a fluffy omelette or when the still-wet beaten eggs are twirled in the pan with chopsticks to resemble a tornado.

As for the rice, in Japan, the default is chicken fried rice and the seasoning can be something as basic as salt.

In this omurice recipe, executed by my daughter Alex, we decided to go fusion over fusion. Instead of a simple fried rice seasoned with salt, Alex cooked kimchi fried rice with thin slices of pork. So, this version of omurice is both Japanese and Korean. 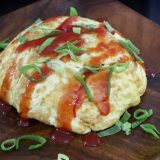