You are here: Home / Food Tales / How to Grade Coffee and Make Cà Phê Đá: A Coffee Class in Saigon

We woke up early on the morning of our sixth day in Saigon for our 9.00 a.m. coffee class at The Yellow Chair. No pick-up was included in the package, we’d have to take a ride in the morning rush hour, so, if traffic was bad or in case we got lost going to the venue, we gave ourselves enough leeway.

Alex went down to buy banh mi for breakfast while I made coffee. We had a leisurely morning meal, showered, booked a Grab ride and off we went.

Why a coffee class in Vietnam?

Most people would “get” why Alex and I went to a cooking class in Vietnam but why a coffee class? Two reasons.

First, we love cà phê đá (the famous Vietnamese iced coffee with sweetened condensed milk) and we wanted to learn how to make it properly.

A short story about coffee and how it came to Vietnam

Has coffee been grown in Vietnam for a long time?

A priest introduced coffee to Vietnam in 1857 in the form of a single arabica tree planted in the garden of a small church in the Vietnamese highlands. Ironic, really, considering that there was a time when the Catholic Church referred to coffee as “Satan’s drink.” It’s true. Drinking wine was associated with Jesus while coffee was a drink popular in the Arab world.

So, I just found it both amusing and ironic that it was a priest that brought coffee to Vietnam where its cultivation thrived to become one of the country’s most significant agricultural products and exports.

We arrived at The Yellow Chair much too early. The staff was cleaning the place at a little after 8.00 so we were ushered to comfortable seats and there was coffee to enjoy while waiting.

It was a lovely wait, truth be told, because the place is beautiful. The paintings, the furniture, the high ceiling… The total ambience was luxurious but not intimidating. In fact, I felt totally relaxed. Unhurried. Calm.

I walked around taking photos. I was curious if the set-up included the upper floors, so, I asked. Yes, we could go up, we were told.

It was just as beautiful upstairs as it was downstairs.

It felt like stepping into the past. Everything felt so serene. Almost bucolic. It was easy to forget that just a few steps out into the street were the crowds and never-ending flow of motorbikes that were everywhere in Saigon.

Finally, it was time for class. There were just Alex and myself to learn about coffee that morning. We felt pampered.

We were handed “cupping forms” to document our description of five varieties of beans.

First, we smelled the beans in their dry state.

Next, hot water was poured over the beans, we smelled them again and documented our observations.

As it turned out, Alex could identify the superior beans just by smelling. I failed.

The bottom line? High grade coffee smells more herby than nutty. If the beans smell chocolate-y, they’re more likely to be soybeans to which flavorings have been added.

Making a good cup of coffee is not a lot different from making a good cup of tea. The proportion between water and coffee should be correct. The temperature of the water must be lower than its boiling point (after the water boils, count 40 seconds before using and the temperature should be just about right). The filter and the cup must be warmed before the ground coffee is added. The coffee must be allowed to “bloom” before the actual brewing begins.

When Alex tried her hands at making coffee, I took photos of every step of the procedure. 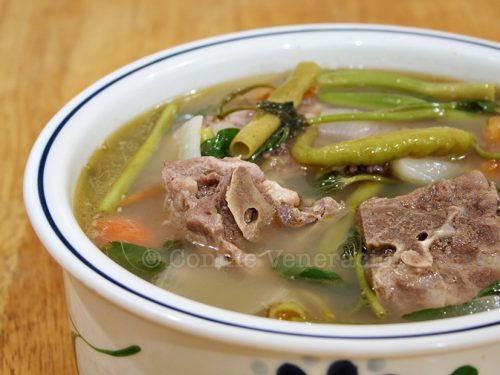 An Introduction to Sinigang, the Iconic Filipino Sour Soup