You are here: Home / Travel Tales / How to Cross the Streets of Saigon Without Getting Killed nor Maimed

One afternoon in Saigon, Alex asked if we could go to the Museum of Vietnamese History. And, if there was time before it closed, could we visit the Ho Chi Minh Campaign Museum too? Sure, I said. The two museums were almost across each other anyway.

I understood that she wanted to explore and you see more when you walk. So, despite the noonday sun, I agreed. And despite the fact that just the night before, we walked all the way from the War Remnants Museum (I’ll write about that later) to the apartment and I had sworn off walking already. Quite vehemently.

We found the restaurant. We had lunch. No one bothered to remember the name because as appetizing as the food may look in the photo above, only the French fries was passable. Talk about badly cooked food. It was the only time that we were disappointed with the food in Saigon. If it was any consolation, the coffee we ordered after giving up on our unfinished food was good enough.

At the Museum of Vietnamese History

So, we walked to the museum on Nguyen Binh Khiem Street just beside the zoo. It was just a little after 2.00 and we figured we had enough time to go through the entire Museum of Vietnamese History and still visit the Ho Chi Minh Campaign Museum after that.

I bought the tickets. The lady at the ticket window asked if I wanted brochures in Chinese or Japanese. English, I replied. When I told Alex about it, we laughed. In Saigon, from the first to the last day of our trip, no one presumed we were Filipinos. We were mistaken for Chinese, Japanese and Malaysian.

Story of my life. Even as a child, shopkeepers often talked to me in Chinese and my parents were forever explaining that I didn’t speak Chinese. It’s my eyes. And the color of my skin. And I passed on my genes to my daughters. But, anyway…

So, we entered the museum and the first thing we saw was a souvenir shop. And we were there for about 30 minutes. Yes, shopping. Then, it turned out that the museum was divided into 12 sections, and each section consisted of a huge room. There was no way we could see everything in those 12 sections and still have time for the Ho Chi Minh Campaign Museum. But we like history more than war so we went through those 12 stations with undivided attention.

Cooling off on a sweltering afternoon with Vietnamese iced coffee

There’s no air-conditioning at the museum and, by the time we had seen everything, all we wanted were cold drinks.

We were in no hurry. We already knew that the Ho Chi Minh Campaign Museum would be closed by that time. We enjoyed our drinks leisurely and I smoked a couple of cigarettes.

Sometime between sipping our drinks and paying the bill, the street suddenly sprung into a frenzy. Alex turned her head around and observed that there was a school in front of the museum and another school to its right. The students were coming out in droves.

A sea of cars, school buses and motorbikes

As we stepped out into the sidewalk in front of the museum gate on Nguyen Binh Khiem Street, we had no idea how to cross to the other side.

If there’s one thing I paid special attention to when making the pre-trip research on Saigon, it was the recurring advice that, when crossing the street, motorbikes will stop for pedestrians but larger vehicles like private cars will not.

That wasn’t true that afternoon in Saigon. It was rush hour. Motorbikes weren’t slowing down to let us cross. Keeping our eyes on the traffic lights at the intersection of Nguyen Binh Khiem and Le Duan about 25 meters away, we waited. When the lights changed and the flow of motorbikes thinned some, we crossed to the island in the middle of the street. Then, we waited for the sea of motorbikes going in the opposite direction to thin down and crossed to the sidewalk on the opposite side.

And that was when we went in shock. It was a rather wide sidewalk but the motorbikes were ON the sidewalk. Not in a single file but three or four abreast. And they weren’t going slow. We were frozen where we stood beside a tree (instinct told us the motorbikes won’t ram onto the tree) and, for several minutes, we had no idea how we were ever going to manage getting to the intersection and turning right to Le Duan Street where it was much less congested.

To this day, I cannot recall in detail how we reached Le Duan Street. I think we half-walked and half-ran much like on auto-mode with nothing but our instincts to survive guiding us. But I do remember that as soon as we were out of the mayhem, we started to feel more relaxed — relaxed enough to notice a vendor selling what looked like ultra thin crispy waffles.

Shaking off the shock

When we reached the apartment, the lady selling banh mi at the entrance was swiftly and efficiently doing business. We bought two, brought them up to the apartment, ate and relaxed.

So, how does one survive crossing the street in Saigon during rush hour? Let me put it this way: Make your brain multi-task. There really is no time to articulate in your head whether to cross now or not. Let your instinct for survival guide you and your brain will tell your feet when to move. You probably won’t remember later how you accomplished it. But you’ll know you did it because you’re still alive and uninjured. 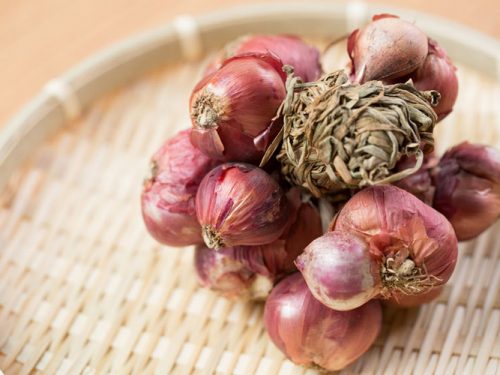