Growing up, I only knew white button mushrooms—canned, mostly; finding fresh was reason for celebration. It’s crazy, really, considering how many varieties of edible mushrooms there are and how many of them are native to Asia. Exotic ingredients for exotic Asian cooking.

But this is the Philippines, colonized by Spain then by America, and until recently Filipinos were more familiar with burgers, steaks and Campbell’s soup than mushrooms.

As far as I know, the interest in other varieties of mushrooms did not really take off until Mushroom Burger in Tagaytay became popular. Although people went there for the burgers, the conspicuous display of fresh and dried mushrooms slowly introduced us to shiitake, abalone and oyster mushrooms.

Discovering them forever changed my life. It was the beginning of my love affair with mushrooms. Years later, when imported fresh and canned mushrooms started entering the local market, I would buy and try every new variety I’d find.

Today, the varieties of mushrooms on grocery shelves are intoxicating.

There are thousands of varieties of mushrooms that have been identified but even experts admit that there are more that have yet to be identified.

So, let’s be clear: Edible Mushrooms 101 isn’t a list of every mushroom variety known to man. This is a practical guide for cooks that includes a list of mushroom varieties popularly used for cooking, how they taste and how to prepare them for optimum results.

Mushrooms are fungi. We know them mostly as spongy things with stems and caps with gills underneath. Not all mushrooms look that way but most edible mushrooms do have that appearance.

Mushrooms are neither meat nor vegetable but, in cooking, they can be treated as either. For many vegetarians, mushrooms are substituted for meat to add bulk, texture and flavor to vegetables.

Not all mushrooms are edible. Some are poisonous while some can have mind-altering effects. You might have come across TV shows where people go into the woods to gather mushrooms, bring them home and cook them. Sounds like a great activity, I know, but unless you can identify edible mushrooms from toxic ones, or unless you have a guide who can do that, know that eating identified wild mushrooms can be a health hazard.

Fresh Mushrooms we cook at home

Fresh mushrooms are available in most groceries and markets. If you’re unfamiliar with some of them, it is always best to ask the seller what their names are and how they are popularly cooked.

Below are fresh mushrooms we often cook at home. I said FRESH. There is one mushroom that we dearly love but have been unable to find in fresh form—straw mushrooms. While I find straw mushrooms superior to all others, I did not include them in the “fresh” list.

White button mushrooms have a delicate, almost neutral, flavor. They soak up flavors they are cooked with. What’s so fantastic about them is their texture. Subtly chewy and not too dense. When introducing children to fresh mushrooms, white buttons are a good starting point.

White button mushrooms can be grilled, stir fried, and added to soup, stews and pasta sauces. 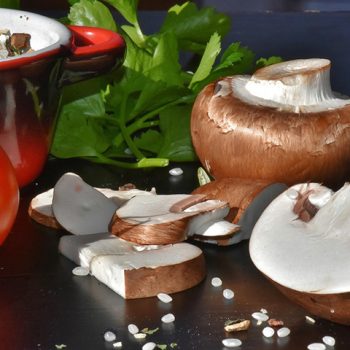 When the color of immature Agaricus bisporus is brown, it is called brown button mushroom. Sold locally as brown Swiss mushrooms, I really have no idea if they were first discovered in Switzerland or if they are primarily cultivated there. 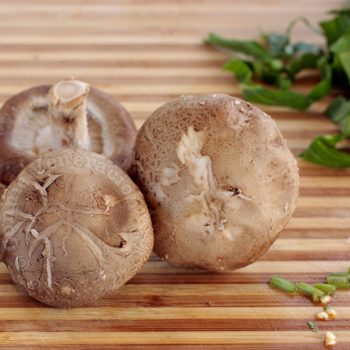 If you love Japanese food, you have probably eaten shiitake mushrooms. They are found in so many Japanese dishes.

Shiitake is “meatier” than white and button mushrooms. It also has a bolder flavor. Shiitake can withstand the high heat of stir frying as well as prolonged cooking. We prefer to pull off and discard the woody stem but, according to a reader, shiitake stems can be boiled, chopped and mixed into spring roll and dumpling filling. 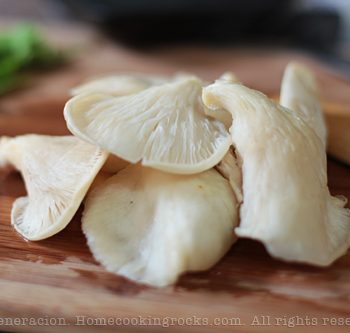 The color is off-white, the topside of the cap is smooth while the underside is ridged. It has a delicate aroma and flavor and only takes a few seconds to cook which makes it an ideal ingredient for Chinese-style stir fried dishes. It is a source of statin drugs used for lowering cholesterol levels. 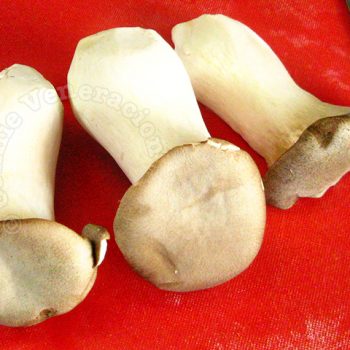 From the same family as oyster mushrooms, eryngii mushrooms have thick (stout) stems and thin caps. Unlike shiitake, the thick stems of the Eryngii mushrooms are neither tough nor woody.

Because of the sheer size of the eryngii, there are countless ways to cut it. Chopped finely, it can go with ground pork to make meatballs or patties. Sliced, eryngii can be added to stir fried dishes. Cut into small cubes or strips, it can be added to soup. Cut into chunks, it can be cooked a la tempura or grilled. 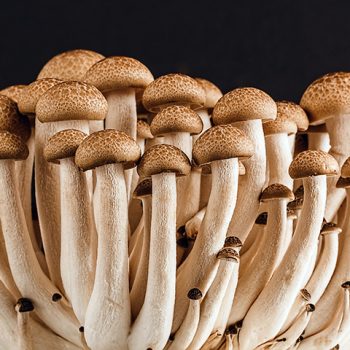 Shimeji refers to a group of mushrooms. The color range from white to dark brown. The size of the caps, and the thickness and length of the stems vary.

In the supermarket, the specie with white or light brown cap about half an inch in diameter is often sold as “shimeji” or “buna-shimeji” while the specie with smaller white cap is sold as enoki. 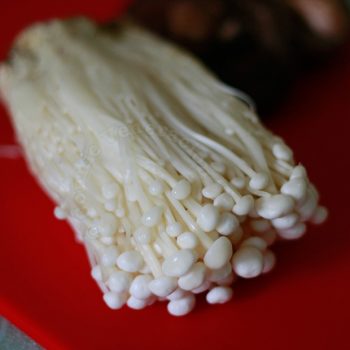 Strictly speaking, enoki is one of the many types of shimeji. Commercially, however, it is sold as enoki, not shimeji. So as not to cause confusion, enoki is listed as a separate item here.

Sometimes called golden mushrooms, enoki mushrooms are a traditional ingredient of Japanese sukiyaki. I bought them for exactly that purpose but I found other uses for them as well.

Enoki mushrooms come in clusters. They require little preparation and a very short cooking time. Cut the stems where they can be separated individually. I prefer to blanch them in boiling water for about 30 seconds only since overcooking can make the stems tough. Use them for stir fries or soups.

Golden Gourmet Mushrooms cites some information about the enoki’s medicinal properties including its “anti-cancer and anti-tumor activity from extracts” in its “powerful polysaccharide called flammulin.” 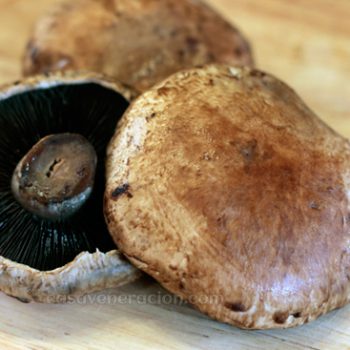 What’s so special about the portobello? The musky, smoky flavor. The size too. Because portobellos are large, the caps can be stuffed. And because they are firm as well, they can be skewered and grilled as a kabob (or kebab, if you prefer). Minced, they are great as burgers (mix with ground chicken and you’re in burger heaven, I tell you).

Some cooks say mushrooms should not be rinsed prior to cooking. Rather, they should wiped with a soft cloth or a paper towel to remove traces of soil. I don’t always follow that advice.

To rinse or not to rinse?

If the mushrooms look like they can do with wiping, I wipe. However, if so much soil is clinging to them that wiping will not suffice, I give them a quick rinse. Take note though that if you rinse mushrooms, you better throw them in the hot pan fast because rinsing the mushrooms then leaving them uncooked will make them slimy. If you absolutely have to rinse your mushrooms, use a salad spinner to remove as much of the water as you can.

Generally, yes, mushroom stems are edible. Not that I’ve had the pleasure of trying all edible mushrooms but, among those that I’ve tried, the stems are as succulent as the caps.

I take exception only with shiitake (a.k.a. “Chinese black mushrooms” although they are not always black). The stems of the skiitake mushroom I find too fibrous and too chewy. I’m sure that there are people who find shiitake stems completely palatable but not me.

With the stems out of the way, I proceed to cut the caps into slices or chunks, depending on the dish I am preparing. 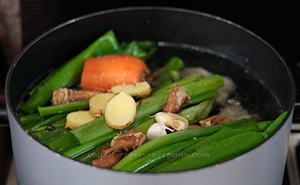 And what do I do with the shiitake stems — throw them away? That’s wasteful. Despite being too fibrous and chewy to eat, shiitake mushroom stems are too flavorful to discard.

So, I add them to the pot when making broth. Throw in with meat bones, spices and aromatics, shiitake stems make a wonderful addition to create a very tasty broth.

Once you’ve cleaned and cut your mushrooms, cooking comes next. Do mushrooms benefit more from quick cooking over high heat or slow cooking over low heat? It depends on the dish you’re making.