You are here: Home / All Recipes / Crispy Chow Mein

Give your pack of instant noodles an upgrade by transforming it into crispy chow mein. The recipe below comes with a video.

Yep, we eat instant noodles at home. I swore them off over a decade ago. You know, empty calories, all that MSG… But when my girls were in college and living in rented condos, instant noodles saved their lives in many ways. And they never got over the habit of stocking up on instant noodles.

Truth be told, instant noodles kept us from starving during travel too. Twice.

The first time was in Saigon. We had an early afternoon flight to Manila and we were hoping we could have banh mi before the drive to the airport. Alex stepped out of the apartment for our banh mi fix but our favorite banh mi lady had sold all her bread for the morning. Alex was in shock. That banh mi wouldn’t be our last meal in Saigon did not quite fit into her travel plan. But the banh mi lady who starts selling early in the morning was about to drive off in her scooter as Alex stepped out of the building. And she wouldn’t be back until the afternoon. We would be up in the air by that time.

The second time was in Hanoi. Sam and I were out shopping and, by the time we were back in the neighborhood of our apartment, the restaurant where I intended to have dinner was already closed. We couldn’t locate the nearest grocery either.

Fortunately, we found a variety store. Not the Western kind of convenience store, mind you, but a neighborhood store where one can buy anything from laundry detergent to instant noodles at cheaper prices because the owner doesn’t have to pay a franchise fee the way operators of 7-11 or Family Mart do. Filipinos would know what I’m talking about. We have those stores too at home and we call them sari-sari stores. We bought packs of instant noodles, more than what we were going to eat that night, because, you know, just in case we found ourselves in a similar predicament again.

So, you see, I’ve stopped thumbing my nose at instant noodles long ago. We keep them in stock at home and we even get creative with them. 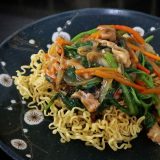 For the stir fry

Chocolate Stories from the Philippines to Vietnam and Back
Next Post: Crispy Cauliflower with Furikake