You are here: Home / Kitchen Tales / A Cook’s Guide to Purple Yam (Ube)

Purple yam, or ube, is Dioscorea alata, a purple-colored tuber. It should not be confused with taro or similarly-colored cultivars of sweet potato.

Ube, long consumed by Austronesians and indigenous to the Philippines, is having its day in the United States. Whether it’s due to the rise in popularity of Filipino restaurants in America or the ube’s visual appeal on Instagram posts, well, it’s anyone’s guess. The fact remains that ube is very much in.

Ube halaya over the decades

In the Philippines, ube has been eaten longer than any existing documentation. Ube ice cream and ube cake have been around since I was very young. They weren’t exactly my favorites as a child but my grandparents and everyone in their generation adored it. Whenever my grandparents hosted family reunions, there was always ube halaya — grated and boiled ube cooked with sugar and milk which, decades later, would be marketed as ube jam. I don’t recall anyone spreading ube halaya on bread when I was a young girl — it was always eaten as a dessert scooped with teaspoons from small plates.

Cooking ube halaya was done in a huge carajay set over glowing charcoal in the backyard. Older cousins took turns in stirring the goopy mixture under the watchful eye of my grandmother. The still hot ube halaya were scooped into large glass bowls, slathered on top with butter that melted within seconds, and left on the counter to cool.

These days, making ube halaya need not be so work-intensive. Ube in powdered form is available in groceries. Of course, it’s nowhere as good as fresh ube. But if you’re in a part of the world where fresh ube is unavailable, powdered ube is a convenient substitute. If, however, you’re lucky enough to have access to fresh ube, let me share how my daughter, Alex, makes ube halaya.

We grow ube in the garden. We used to buy from the market though. But finding fresh ube was often a hit-and-miss experience as it is not as widely nor easily available as potatoes, sweet potatoes and taro. So, we grew our own ube. That way, we know that we’re making halaya with the real thing.

I mention this because we have come across videos on Youtube and Facebook, targeted at wanna-be food sellers, where the cooks use either mashed potatoes or sweet potatoes, add food color, pass off the mixture as ube halaya, and urge viewers to do the same to cut costs. I find the practice objectionable on so many levels.

If you’re a cook and you want to make ube halaya, start with real ube. I know it’s something easier said than done. How in the world can an ube newbie tell if he’s holding real ube or purple-colored sweet potato in his hand? Go to a reputable seller and ask. Say exactly what you require.

When you have your fresh ube, you need to rinse it very well before you do anything else with it. Ube is a root crop and, if it had just been harvested, there will likely be some soil stuck on its skin. Rinse under the tap and use a soft clean brush to pry loose any soil that stubbornly clings on.

Wipe the rinsed ube with a kitchen towel and peel. Just to be clear, this isn’t anything like peeling potatoes. Ube skin is thicker and tougher. But removing the skin is essential. So, peel it. With a vegetable peeler or with a paring knife, whichever feels more comfortable in your hand.

Cut the peeled ube into three-inch cubes, place in a microwavable bowl in a single layer, pour in about an inch of water, cover with cling film and cook in the microwave on HIGH for ten minutes, flipping the pieces over midway through those ten minutes.

Ten minutes? No more or no less? Well, microwaving for ten minutes is not a rule set in stone. What you’re aiming for is that when you poke a thin sharp knife, or a skewer, right into a piece of ube, there is should be resistance at the center but only at the center or very near the center. How long it takes for the ube to cook into that ideal stage depends on how young or how mature the tuber is.

Why microwave the ube? Two reasons.

There are three ways to grate the partially cooked ube. You can use an ordinary vegetable grater, a food mill or a food processor. What to use depends on what you have in your kitchen (of course!), how much manual work you’re willing to perform and, the most important reason, what texture you want your ube halaya to have after cooking.

Texture? Let me explain with an example. In Baguio City, long referred to as the summer capital of the Philippines, ube halaya has forever been a favorite item that tourists buy to bring home to Manila.

There has always been plenty of ube makers and sellers in Baguio City but two brands, Good Shepherd and Romana’s, were among the oldest and most well known. Good Shepherd’s ube halaya was smooth like a paste. Ramona’s was coarser and chunkier, and one is likely to chance upon small pieces of ube that had escaped the grater (I use “were” and “was” instead of “are” and “is” because quality has changed over time).

At home, use the food mill or the proper attachment of the food processor to get a smooth grind if you prefer smooth ube halaya. Use an ordinary vegetable grater if you’re more a fan of chunky ube halaya.

We prefer chunky ube halaya. So, the partially cooked ube goes through a vegetable grater. One with big holes. The kind you’d use to grate potatoes.

Cook ube halaya on the stovetop

The grated ube is placed in a pan (a non-stick wok is really ideal) where it is heated until every strand of ube is cooked through. Cooked with liquid, of course.

If the ube is already partially cooked, you don’t need a lot of liquid. Just evaporated milk (some cooks use coconut milk) and sweetened condensed milk for a really rich ube halaya. It’s a good idea to add a little salt to create contrast with the sweetened condensed milk. Just stir over medium-low heat until the ube loses its raw crunchy texture. If the mixture dries up before the ube is done to your liking, add water, about half a cup with every addition.

And, yes, you have to stir. Often. To coax the starch and turn the mixture into something goopy. The local description is “naglalaway” which is quite picturesque although the English translation — drooling — is not exactly appealing. If you’re cooking with real ube, the mixture would have a high viscosity. This isn’t like stirring butter and milk to make a roux — you will feel the resistance as you stir ube.

So, in terms of texture, you’re aiming for two things. You want to lose the raw crunchy texture of the ube AND you want the halaya to be thick and sticky — thick and sticky enough that when you lift the spoon you had been stirring it with, the mixture shouldn’t effortlessly slide off and drip back into the pan.

Once the ube halaya has reached the ideal cooked texture, add butter and as much sugar as your taste buds dictate. And stir again until the sugar is fully dissolved and the butter has been fully incorporated.

Why not add the butter and sugar at the beginning? The sugar is just a supplement to the sweetened condensed milk. You add sugar only if you want the ube halaya to be sweeter. The butter is a finishing touch so leave that until the end.

Taste again. Adjust the amount of sugar or salt, or both, until you get the balance you like best. When the taste is fine, add another chunk of butter and stir until no buttery streaks are visible.

How to store ube halaya

Cool the ube in a loosely covered container until it reaches room temperature. Then, scoop into jars, cover tightly, and keep in the fridge. It stays good for a week or so.

How do you tell if ube halaya is still good? If liquid starts to separate from solids, throw it out.

How to serve ube halaya

Truth be told, we eat it like ice cream. We scoop it and drop it on a plate and add whatever topping we have. I like it with macapuno balls.

Why is there no proper formatted recipe for ube halaya? Because not all ube in the market is the same. A recipe that says, for example, two cups of milk for every cup of grated ube might work if the ube is young. But if the ube is mature, you might need more liquid. So, a huge part of making ube halaya is the ability to eyeball.

How we use ube halaya in cooking 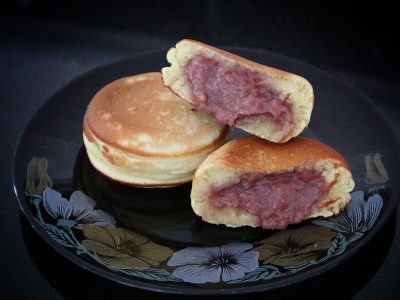 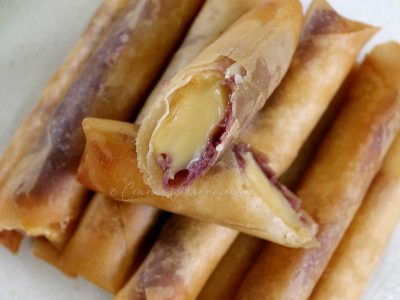 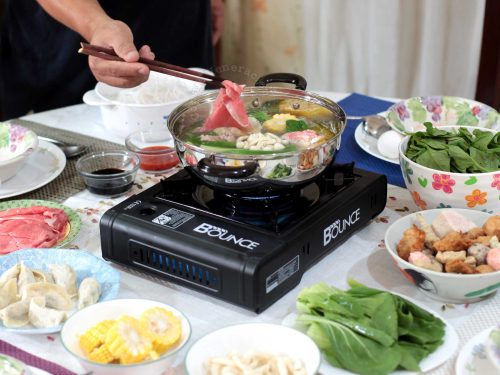 How to Set Up a Hot Pot (Steamboat) Meal at Home