You are here: Home / All Recipes / Chicken Nanban with Tartar Sauce

There was a Japanese channel on satellite TV called NHK World where the shows were a mixture of news, cultural documentaries and cooking. When we were not the Wonderloop bus in Osaka last year, we passed by the NHK building and the tour guide explained what it was. And I thought about all the wonderful cooking shows and food documentaries we have enjoyed on NHK World over the years.

Anyway, because no one in the family speaks Japanese, we rely on the subtitles. This dish is from a recipe in one of NHK World’s shows, Dining With The Chef.

It was my husband, Speedy, who saw it. He enumerated the ingredients and described the procedure, then suggested that the full recipe might be available on NHK World’s website. It was. And my version of chicken nanban was based closely on that Dining With The Chef recipe. Unfortunately, after the website was revamped, I could not locate that recipe anymore.

Chicken nanban consists of pieces of chicken fillets that are seasoned, coated with starch, and fried just until crisp.

The fried chicken is then marinated in a sweet-sour sauce that had earlier been boiled and cooled. Just three minutes per side and the chicken soaks up all the wonderful flavors of the sauce.

Doesn’t the crispiness get affected by the marinating? Surprisingly, it is not. The marinade contains sugar which, when cooled, caramelizes and protects the chicken’s exterior so that the crispness stays long enough for you to enjoy chicken nanban.

It is traditional to serve chicken nanban with tartar sauce which is quite different from the Western tartar sauce. The Japanese version includes crushed hard-boiled eggs. 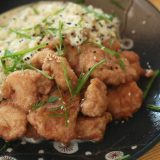 For the tartar sauce

This is an updated version of a recipe originally published in my other blog in September 23, 2013.