Called bánh caramel or kem caramel in the north, and bánh flan or kem flan in the south, Vietnamese crème caramel is a steamed custard made with coconut milk.

I made this back in February of 2008. At the time, I hadn’t set foot in Vietnam yet, I knew very little about its cuisine, and I thought I invented a new sweet dish. I simply called it coconut custard and, in parenthesis, leche flan with coconut milk.

There is also a variation with mango puree which I made a mere two weeks before this one. But that one, I’ll post a separate recipe for.

So, is bánh flan anything like its French ancestor? Yes and no. There’s no dairy milk in bánh flan; there’s coconut milk (or, in my case, a combination of coconut cream and milk infused with pandan leaves) instead. It isn’t cooked in the oven with a water bath; it is steamed.

What bánh flan shares with the French crème caramel is the silky smooth texture of the custard. And the caramelized sugar topping which, in the case of bánh flan is a shade darker which gives it a slightly nutty but not quite bitter flavor. 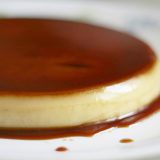 Updated from a recipe originally published in February 26, 2008

Thai Mango and Sticky Rice with Coconut Milk (Khao Neaw Mamuang)
Next Post: “From Up on Poppy Hill”